Well I have since put these little guys into the biddie pen. They grew so fast in just over a week I had to put them in the larger coop and they are loving it.. I took the removable nest boxes out so that they would not be using them to do their business in and will keep them here for a few more days and hopefully be able to let them into the run. I still have some revamping to do.. Just finished putting the top on the cabinet run cause Boo Boo was showing them how to get up top and fly out and had to keep chasing biddies down and putting them back.. 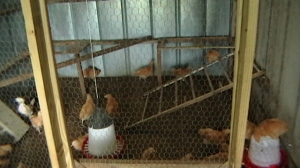 Here is a better shot as well as a criss cross roost and 3 areas for nest boxes I used some plastic storage containers that had air holes in them easy to take out and clean.

This is their new abode I used a crib side for the little roost just cut out every other dowl.

Buff Orpington having a drink

This is the biddie pen when it was finished up top the game birds are underneath of it .. the 5 biddies/pullets are in the right hand side now and Lucy and Charlie Brown on the left with the run.

the sliding door dividing the sleep area from the play area and I even put a swing in.

They have grown even more since I took this picture.

Boo Boo went broody and hatched out 5 game bird biddies I had to put fertile eggs underneath of her so the neighbor gave me some.

This is her broody pen that I built and it served them well for the first couple weeks and I moved them to the outside cabinet coop.

I use what ever I have handy and sometimes use my creativity to make things out of nothing.. I also built a nest box for the cabinet coop cause I also put Betsy back in there.. We have been having a lot of trouble with predators so I have been keeping them inside the runs for safety.. I lost the 2 hens I had been nursing because of that just recently and one of the main Queen hens about a month or so ago. The one thing I have learned is some other techniques of keeping them away. I do not have a infrared cam so I keep the radio on at night.. the other thing I am doing for the hot weather is keeping a fan on in the shed where the Buffs are to keep the air flowing.. I also still have the goats in there at night but their corral is done except the door and still have to put some kind of s shelter up for them before I can take them out of the shed. 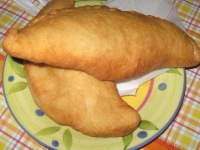